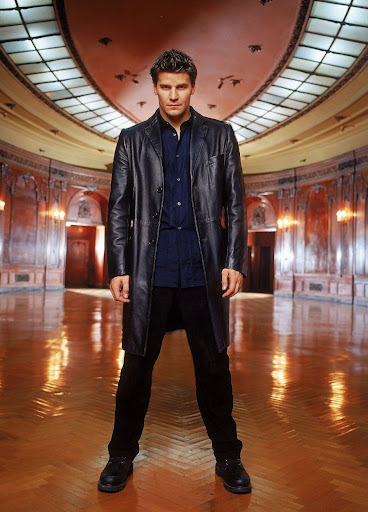 As another show moves towards a huge milestone, the former lead has teased that there may be something new coming soon!

Buffy was a huge part of my life growing up. Both it and the spin off, Angel, left lasting impressions and I still try to watch through both at least once a year. There’s been talk of a revival all the way back to when Angel was cancelled (way too early) in it’s 5th season but with the recently announced Buffy reboot, hope is rekindled and now there’s some more fuel for the fire!

Appearing on The Talk, David Boreanaz suggested that there may be something in place to commemorate the hugely successful spin-off of Buffy the Vampire Slayer’s platinum anniversary this fall.

“We’re coming up on our 20 years,” he noted. “That’s amazing to have been blessed with a show like that. That’s really where I started my gig in this acting world. I love that character. So I will say there may be something coming up. I don’t want to give away a lot. It’s 20 years coming up this fall, and we may have something in the works.”

“Come on, guys, it’s a good thing,” he told a very skeptical crowd. “Let’s just embrace [it]. I’m very happy for them. They want to embrace a new generation, something new.
“Everybody wants old, they want to go back, which I can understand,” he continued. “You want to see us back in these roles. It’s great, it’s cool, [but] things move on, stories evolve, times change. I think it’s a great opportunity for a reboot like this to show where we are with society now, what you can do with technology… I’m all for it.”

He even gave his blessing to any actor who would potentially be taking on the role of Angel:

“If someone can step in my shoes and play my character, fuck, go ahead!” he enthused. “I think that’s great, because I ain’t putting on that makeup anymore!”

I can’t say I blame him for that thinking, though it probably doesn’t take as long as it used to to apply the Vampire make up. In the past, he has made no secret of his lack of desire to return to the old role but has often been very vocal in backing any project connected to the world of Buffy.

So maybe there’s an Angel spin off already in the works, maybe it’s just a one off or maybe just a reunion on a talk show, we’ll just have to wait and see!