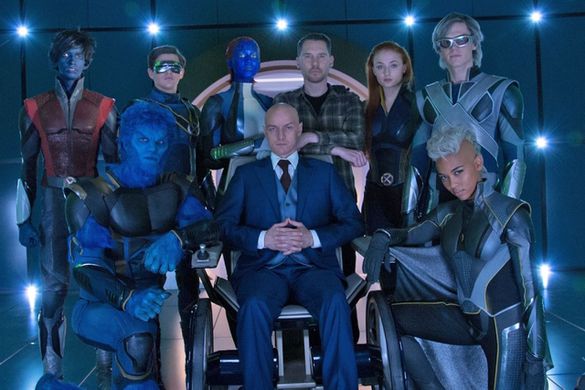 Okay, so buckle in, there may be turbulence ahead.

Earlier today (last night for some parts of the world) Fox dropped the latest (maybe last) Dark Phoenix trailer, located below in case you missed it.

As far as trailers go, it’s not bad. I certainly don’t think it’s heading towards anything nearly as bad as X3 or Origins but it certainly doesn’t have me hyped. I actually think I summed up my thoughts on it best earlier in a chat with the rest of the team.

It’s not a new story by any stretch but more important than that is how they tell it and the trailer suggests that they are going “all in” on it. The trailer seems to confirm that the funeral we’ve seen the characters attending is that of Raven/Mystique, played by Jennifer Lawrence. Unlike most spoilery trailers, I actually applaud this move.

J-Law’s involvement in this franchise has been one of the most consistently bemoaned things amongst fans, many claiming that she is simply phoning it in and rumours that she refuses to don the full Mystique look for more than a few scenes only add to the annoyance. Indeed she was signed to this contract before she’d become the household name she is now and it seems that both she and the company sought to use her fame for their own gain. She should never have been a key player for the X-Men but the actress’ status demanded that she be front and center. Killing off the character is a multi-faceted win. It’s symbolic of the end of the foX-Men universe, it shows off the threat that the heroes are up against (you may remember another comic book movie that used a similar tactic) and it can satiate a rabid fan base, who’ve been baying for her blood for two movies now!

I’ll still see this film, I think it looks entertaining and that is the name of the game. On a somewhat related note though (here’s where the rant starts), the X-Men movies come with their own stigma. Almost instantly dismissed as a mess…but are they?

I think it’s almost become a bandwagon thing at this point, to write off these films. I dug up some numbers on them and I think they prove my point.

There’s been 11 films in the foX-Men universe, across 19 years. That’s nearly two decades of films, spanning 3 trilogies and it is no exaggeration to say that without 2000’s X-Men that we most likely wouldn’t have the MCU. Of those 11 there are only 2 that are terrible. Granted, they are nigh unwatchable and irredeemable but that’s still only 2 films, nearly 90% of these films aren’t terrible. Some are only moderately good, while others are considered to masterpieces.

X-Men is widely regarded as the father of the current CBM market (Blade is the grandfather that everyone forgets about) and rightly so. Nobody was doing superhero films and if they did, they were not greeted with open arms. Instead they were Dredded (it’s deliberate) but here FOX and Singer showed us that quirky characters, with larger than life powers can have work and you can still have a cohesive story in there too. It sits pretty on IMDb with a 7.4/10 and took an impressive (for it’s time) 296 million from a 75 million budget. I’d rank it at 6/10. A really good start, establishing a great foundation.

X2 followed 3 years later and now had hype behind it but being no longer having to tell origin stories meant they could get right into the good stuff. It is often considered the best of the main continuity films and rightly so. The cast were great, the story great and I dunno if any other live action X-Men has captured the heart of the comics as much as this one did. It just pips the first one, ranking at 7.5/10 and raked in over 400 million from a budget of 110 million. My rank of this one is 8/10, they took what worked from the first and ran with it. Jackman really made Wolverine his in this film.

There’s nothing I can say about X3 that’s not already been said. It’s truly terrible and is often used as a benchmark for how bad a CBM is. It sits at a curiously high 6.7/10 and took almost 460 million, with a 210 million budget. A noticeable decline. I struggle to think of good things in this film, the Phoenix force is such an amazing entity and was billed as the big threat but is little more than a bit part. Anna Paquin, Ellen Page and Shawn Ashmore all give good performances, as do Jackman, Stewart and McKellen of course. The showdown between Logan and Jean is actually quite awesome. All this is however undone by: “I’m the Juggernaut, bitch” My rank 5/10.

Here is the TRUE low point in this franchise. He’s been the best character, it makes sense to do a spin off with X-men Origins: Wolverine(2009). This was meant to be a launching off point but it was a mess. It messes up the entire continuity, makes a mockery of several characters (THEY ACTUALLY SEWED DEADPOOL’S MOUTH CLOSED!) and somehow made the effects look worse than 9 years earlier. To add to the insult, it was written by David Benioff, one half of the Game of Thrones writers! Nice things to say? A fan servicey Gambit cameo, the opening and War montage, the one scene with Ryan Reynolds cutting up bullets and, my personal favourite, seeing Will.i.am have his heart ripped out. Somehow it still sits with a lofty 6.6/10 which is less than a full point below X2. It made 373 million from a budget of 150 million. I rank this at 4/10 and still feel it’s generous. If it wasn’t for Jackman, this is easily a 2/10.

X-Men:First Class followed in 2011 and is both a reboot and a reimagining but in trying to fix some of their messes, they made the timeline worse, somehow. That, however is where my criticism stops. I love this film, the cast is great (McAvoy and Fassbender, in particular), the setting is cool and the story is actually quite good, too. If I had to pick out highlights, I’d say Darwin’s death is a stand out but the best moments are every interaction between Charles and Erik. With a rating of 7.7/10 it jumps ahead of X2 but was not as much of a commercial success, taking 353 million from a budget of 160 million. My ranking is 7/10, it doesn’t quite hit the heights of X2 but as far as origin stories go, it’s one of the best.

The oft forgotten (and underrated) The Wolverine came up next in 2013. It is set after the events of X3 and sees Logan trying to move on, but unable to let go. The movie has some excellent scenes and the cast is, once again, great but it does get a little messy. Seeing Logan “De-powered” and vulnerable was a great idea though and a wise breath of fresh air. The ending was disappointing, however. The train sequence was well shot and the scene with Logan charging the tower near the end is quite cool too. The Japanese setting allows this to be easily distinguished from the rest of the timeline. The opening sequence is awesome, the visual effects are both disgusting and beautiful. At 6.7 it’s tied with the Last Stand (which is harsh) but it took a staggering 414 million from a budget of 120 million. This gives it the second highest box office gross and third overall profit (at this point). My ranking is 6.5/10, the choreography and actors hold this up, while a messy timeline and occasionally silly story choices tear it down.

While First Class came in and retold an origin story, 2014’s Days of Future Past re-wrote everything. This film should have been a mess but it blends the two fractured timelines beautifully, with the future versions seeking to alter the past, to save the future. Though it does nothing to alleviate the confusion of what’s happened, it undoes a lot of the damage, including writing off entire story lines. The cast is the best it’s ever been, with the old favourites starring alongside the next generation. I really struggle to throw criticism at this film and struggle to pick just a couple of highlights. The final, hopeless showdown in the future is brilliant, yet heartbreaking, seeing these characters die and the Quicksilver scene? Brilliant! It’s the new king with an IMDb rating of 8/10 but also a gargantuan 200 million budget that saw a return of 748 million. Taking top rating, gross and profit. My ranking is 8.5, I feel this one is often overlooked when talking about great CBM’s, it does a fantastic job juggling a mammoth cast and still telling a great story.

In 2016 X-Men Apocalypse hit theaters to moderate success. It’s easily the worst of the new trilogy but that still stands it above many other films. It was disappointing to see such a huge character come and go without much effort, though I did enjoy the presence that Oscar Isaac brought to the character. It falls into the trap of knowing the “good” bad guy will have a change of heart in the end and wastes Angel and Psylocke. I don’t feel terribly strongly one way or the other on this one. Once again, Quicksilver steals the limelight and the showdown in Charles’ mind with Apocalypse is pretty cool. IMDb has it at 7/10 promptly between The Wolverine and X-Men and it took a huge 543 million, with a budget of 178 million. I’d say this ranking is probably quite generous in comparison to others, I score it at 6/10. Enjoyable but forgettable.

Logan is considered a modern masterpiece by many and so it should be. I could sit and go on about this film for hours but I’ll spare you that and instead say that few films illicit such a reaction from me as the final act of this film still manages to get now, at 20+ viewings. Just edging out DoFP, Logan gets 8.1/10 on IMDb and returned a fantastic 619 million from a budget of 97 million. All the more impressive is that it’s the second lowest budget, after X-Men, making it one of the most profitable of the series but it also received an R rating, meaning it couldn’t bank on the same audience that the previous films could. I can’t score this as anything other than 9.5/10 (there are no 10’s).

9 films, we haven’t even covered the Deadpool films, they’re only loosely in the same universe anyway. However, Deadpool has a ranking of 8 and took 783 million despite being made for just 58 million (RDJ commands nearly that alone!!). I rank it at 7.5/10.

Deadpool 2 has a rating of 7.8, was made for 110 million and returned 784 million, becoming the biggest R rated movie of all time. I score it at 7/10, not quite as good as the first but still great fun.

All in all, it’s down to personal preference but honesty ask yourself; how many of these would you actively avoid watching? So, if it’s not the quality of the actual films, what is the problem? Are fans too hard on this series?