Fast and the Furious 7 : Review. 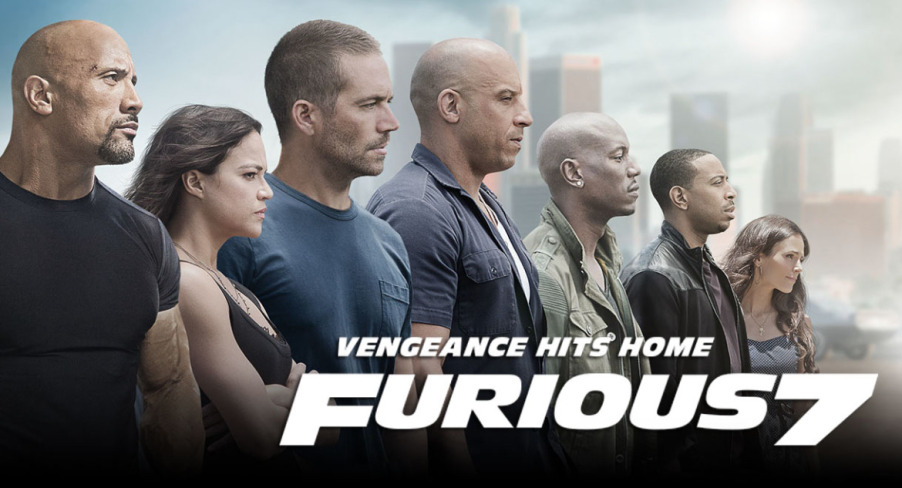 Lordy lordy me. Tell you what right out of the bat – you want a film that gives you style over substance with girls in bikinis, fast cars and a crazy plot – this is it…

There is not going to be a detailed plot breakdown for this review, basically because even though I was trying to take notes as we go it was all a bit mental as I watched, but I’ll try. Film stats out by introducing Jason Statham as Deckard Shaw, the brother of Owen Shaw (Luke Evans) who was part 6’s antagonist. By introducing, I mean fully introducing as those of you who waited to see the credits scene in Fast and the Furious 6 will have already met him. We get an idea of how bad-ass he is by the trail of destruction he leaves in the hospital when paying his brother a visit and in the next 20 odd minutes of the film he has killed Han, taken out Hobbs (The Rock) and attempted to blow up Dom (Vin Diesel), Brian (Paul Walker) and Mia (Jordana Brewster). Hell of a way to introduce your big bad.

After this I can only really summarise what happened as follows. Mr Nobody (Kurt Russell) introduces himself to Dom and in exchange for capturing a device called the God’s Eye and a hacker who goes by the name Ramsay (Nathalie Emmanuel), he will help Dom track down Shaw. Over the next hour and a half we get the story of how the team capture Ramsay, who is brought into the fold, and the film wraps up with the team getting revenge and capturing Shaw. Honestly, if I explained the whole of it I would be here as long as it would take you to watch it yourselves…

Now, onto the crazy parts.. and there were LOADS.

Dom and Shaw have a game of chicken – no one moves.. crash.. both are unharmed.

Cars fall out of a plane and parachute into the mountains – frankly ridiculous.

Brian jumps off a bus that is falling off a cliffside, just manages to grab onto the back of a car – barely a scratch.

Dom and Ramsay deliberately throw themselves off a cliffside in a car – hardly a bruise.

Brian and Dom use a bulletproof hyper car (above) to jump from building to building in Abu Dhabi.. both are fine… When the hell did these guys all get superpowers?..

The Rock takes out a reaper drone by driving off a bridge in an ambulance while it flies underneath.. nothing wrong with him.

Im sure there were other mental things you notice whilst watching but the sheer nonsense of the above outshines them.

Wait, wait… one more… Dom lifts a Lykan Hypersport deadlift style and holds it up at waist height for around 2-3 minutes. This car weighs in at a kerb weight of 1,380Kg… nah, I’m out…

Still. It was highly enjoyable. Rhonda Rousey makes an appearance as a bodyguard and gets a lengthy fight scene against Letty (Michelle Rodriguez). The fight scene itself was ok, just don’t let her talk much, that part was hopeless.

Couple of facts, cause you know (if you listen to the podcasts) that I like my film trivia. 230 cars were destroyed during filming. I did wonder to myself what the car damage bill must have been from this while watching as it seemed like every minute there was another car being destroyed. In the timeline of the Fast and the Furious films this takes place immediately after 3 and they brought back Lucas Black to help tie it all in nicely. It became the fastest film at the time of release to hit $1 billion dollars.

If you accept what it is I am sure you will enjoy it. Its currently on Netflix (UK) now.